Ginseng and High Blood Pressure
Can It Help or Not?

On and off for years, the issue of Ginseng and high blood pressure has been wrangling between researchers. What is this root, and does it affect high blood pressure like they say? The word `ginseng` is derived from the expression `man root` (jen shen) because its shape usually resembles a person.

Others species are –
Korean
Siberian (said to be good for stress) 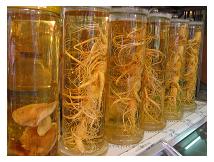 Most tests have involved the Panax species and it is the most widely used. You can buy it as a liquid extract, or buy the root sliced.

The white root has been washed and dried, changing its color to a lighter shade. It is mostly this type that has been extensively researched. The red has been steamed and dried.

How can Ginseng be good for blood pressure when many herbalists are saying the opposite?

For centuries herbalists have believed the herb has powerful healing properties. It is a potent anti-oxidant that can help minimize the effects of stress, a high factor in the development of hypertension.

It`s said to support glands and help balance their release of stress hormones such as the adrenal glands just situated above the kidneys, which is helpful to know if you suffer from frequent panic attacks or stress.

You need to protect your blood vessels from becoming weak and damaged. The constant raising of blood pressure caused by adrenalin secretion, will only wreak havoc.

Some folks might say this is all hearsay where is the proof, and they would be right to take that stand if there was no scientific data but it`s there if they care to do some searching.

Tests for Ginseng`s effect on blood pressure have uncovered other, notable health benefits too that may interest you. For instance, did you know that the root has been found to lower cholesterol. Sure beats taking Statins, I should say!

It can also help prevent blood clots, so do some of us really need aspirin?

What about your ticker? Well, it has been scientifically proven to boost cardiovascular function. In fact, a biochemist called Siberian ginseng, “One of nature’s top adaptogenics”. That means it helps the body to balance itself out in many of its systems. So if you are hypertensive, it will help bring blood pressure down and those who are hypotensive, it will help bring it up. This is the species know to reduce the stress effects I spoke of above.

Adding Fuel to the Fire

What was the common notion held in the past regarding ginseng that led many to believe it was not good for hypertension?

In 1979, the Journal of the American Medical Association published a study which reported that ginseng caused high blood pressure and irritability.

The report was wrong and the researchers had to retract their findings.

These kind of erroneous reports do, however, have a tendency to stick and leave a bad impression on the minds of the public that serious ginseng side effects exist, and this thinking can stay “rooted” for a long time. Even when good reports have surfaced, first impressions do persist.

When I went to buy some ginseng liquid extract, seen in the ginseng photo below on the right, I got into conversation with the Chinese counter assistant that I was writing this article about ginseng and high blood pressure. Her immediate reaction was in the form of a warning. She said, “No, no, no! Do not take ginseng for blood pressure!”. I went on to explain to her that there is a danger to those with uncontrollable high blood pressure, or for a pregnant woman, but apart form that, if taken within moderation, ginseng has no known side effects.

Are the more recent reports on ginseng making any impression?

Up until lately, it was still thought to cause a rise in blood pressure but in April 2006, the Hypertension journal published the results of a test involving the subject.

After a period of 12 weeks of monitoring the blood pressure and renal functions of 52 adults with high blood pressure, researchers found that a daily dose of 3g of North American ginseng did not raise levels nor cause kidney damage.

Panax and Siberian were not tested in these trials, so its best to take caution when using these species. I recon the controversy over this topic will continue, but at least what we have discovered from the past up until this present day is that the root continues to be reported as a healing herb for those suffering from  many diseases, including high blood pressure.

Ginseng is a marvelous tonic, if taken in correct dosage. It not only is good for reducing blood pressure, but is good for the heart, circulation, and reducing cholesterol amongst other diseases.

It is both a stimulant and a sedative so can raise blood pressure in some and lower it in others. [Ref:A]

Complementary herbs and vitamins that can be safely taken with ginseng are, saw palmetto and vitamin – B complex along with a multi-anti-oxidant for support.

It is best to collaborate with health consultants if you would like to try the herb in conjunction with blood pressure medications. As far as I know, ginseng will enhance warfarin and the antidepressant drug phenelzine, but because it is a stimulant it could enhance other pharmaceutical medication including high blood pressure meds. So be wise and be cautious with it. It could be your answer to treating hypertension without drugs.