Hawthorn Benefits –
for those who use it!

Hawthorn (Crataegus) a well respected high blood pressure herb. Hawthorn benefits the whole of the cardiovascular system not just the heart muscle as we shall see.

This is a herb that I have high regard for because of it`s potency and effectiveness. It grows abundantly in Europe, the Mediterranean, North Africa, central Asia, and some locations in North America. So quite a common herb that is easy to come by.

There are several species but those that are mostly used for medicinal purposes are C.Laevigata, and C. Monogyna. This woodland bush is not merely a land dividing hedge but contains a power house of healing properties. Let`s see just how it may help reduce your blood pressure.

Hawthorn contains many flavonoids. It is the action of one of these called proanthocyanidin which is responsible for the dilation of blood vessels, a natural vasodilator. Clinically proven to lessen the resistance in the peripheral vessels due to the dilation of the coronary arteries, it has the potential to lower hypertension as well as alleviate angina.

But the healing properties of the herb have been known for centuries. Both the ancient Greeks Dioscorides and Paracelcus, the medieval father of toxicology, recognized it`s ability as a heart therapy. Even so, it was more associated in folklore and magic, and did not become popular as a medicine until the 19th century.

Obviously we need authoritative documentation proving the herb`s potential as a natural medicine for the heart and blood vessels, and we have indeed this support.

In 1994 the German Commission E published 1 approved standard for Hawthorn flowering tops, a monogram based on updated clinical trials, and not on older ones that did not meet with good clinical practices, and another 3 monograms documenting the outcome of updated trials on the berries, leaves, and flowers individually.

The older approved monogram grouped the testing of these components of Hawthorn as one, documenting that they were effective in treating coronary complications, coronary circulation problems, a weak heart condition, other heart and circulation problems, arteriosclerosis, and hypotension. This document is now outdated and the three new monograms documented in 1994 class the trials of the separate components as unapproved with not enough evidence to support their effectiveness. 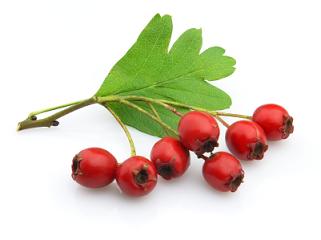 Other Hawthorn Benefits That May Help Reduce Blood Pressure

Not only is this herb known as a cardiotonic, vasodilators, diuretic, and sedative, did you know it contains tannins that have antioxidant properties? It has been clinically shown to inhibit LDL oxidation, a risk factor in the development of atherosclerosis.

Furthermore, it contains the enzyme superoxide dismutase that dismutates the destructive free radical “superoxide” found in all living cells into hydrogen peroxide and oxygen, helping to slow down age related problems.

And if that were not enough, we could do with something that wages war on returning atherosclerosis after angioplasty, so I feel it appropriate to add the following journal link to the great benefits of Hawthorn. (Atherosclerosis Journal Volume 211, Issue 2 , Pages 409-417, August 2010)

Not forgetting the vitamins and minerals, it contains vitamin A, B-group, C, E, F, plus potassium, calcium, copper, sodium, zinc and iron.

For those who need the dosage, Hawthorn tincture or capsules can be taken 200 – 500 mg daily. Or if you have the powdered berry, half a teaspoon in water 3 times a day.