Hypertension in women is not considered a risk factor until they reach menopause. 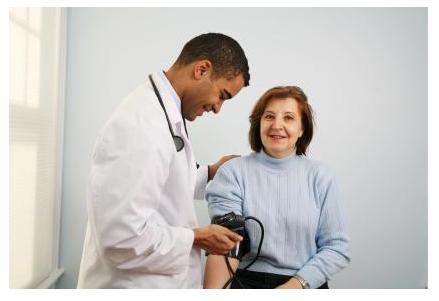 When numbers reach beyond these levels, the health of your cardiovascular system is certainly in jeopardy.

It seams like pre-menopausal women have a little support. High levels of estrogen that help blood vessels stay flexible, gives extra protection from developing high blood pressure. Once the estrogen and progesterone start to decline, however, the risk increases.

Up-to-date research is proving this a fact, but showing that not only hormones play a role in the differing systolic pressure between the genders. Other factors may possibly be contributing.

Dr. Jennifer C. Sullivan, a pharmacologist and physiologist at the Medical College of Georgia Vascular Biology Center, has been studying other factors that may cause hypertension in women to develop later than in men. She said tests were showing that nitric oxide synthase could be making more nitric oxide in females than in males.

This is all good news, but women need to be aware that there are risk factors that cause women to go on to develop hypertension. Learning what are they are can help you to decrease the risk.

HRT May Increase Hypertension in Women

In general, it is believed that women who accept and use Hormone Replacement Therapy do not experience an increase in blood pressure. It is noted too that some actually have a reduction.

However, HRT can cause an increase. What causes this is still yet unknown. It could be several reasons, one of them being the wrong dosage of synthetic Estrogen used, or the way it is administered. Your doctor can give you advise about which way is best for you. Some women have noticed that when they stop taking HRT, the symptoms disappear. The Mayo Clinic reports that menopausal women using hormone therapy may be more at risk of developing high blood pressure than women who avoid it.

Oral Contraceptives Cause Hypertension in Women by 5%

Again a surprising result for some of you ladies. Estrogen either causes a detectable change, causes no change, or reduces BP. But in 5% of women it causes a rise in the systolic and diastolic. That amounts to 1 in every 20 women. You could be one that one!

Vitamin D Deficiencies May Cause Hypertension in Women

At the American Heart Association`s High Blood Pressure Research Conference, September 24th 2009, it was reported that pre-menopausal women may be at risk of developing it in later years if they lack in vitamin D.

The results of 559 Caucasian women tested for bone health and metabolism were recorded over a period of 15 years, and showed up that pre-menopausal women who had vitamin D deficiency were 3 times at risk of developing systolic high blood pressure 15 years later in comparison to those who had normal levels.

The researchers determined that the vitamin D the women lacked comes from Ultraviolet B rays from the sun, and from fish.

This serious medical condition that can harm both mother and foetus, may develop as early as the 20th week of gestation. The symptoms it produces are excessive amounts of protein in the urine, damaged arteries and blood vessels that lead to the placenta, and hypertension in women who are susceptible. But it can be difficult to diagnose if a patient already suffers from high blood pressure, and sometimes raised pressure can develop without any symptoms of protein in the urine, which is called Gestational, or Pregnancy Induced Hypertension (PIH)

It`s important to know that these are the symptoms, not the causes. Several factors could be the cause of preeclampsia, and can differ in each individual.

It can develop in as much as 10% of pregnancies, but particularly in women who are pregnant for the first time. There is no cure, so the only way of treating it is to induce labor or perform Caesarean section.

Is there any way of preventing it from developing? This is still under investigation, yet there is evidence that in many cases of pre-eclampsia, the mother`s immune system is intolerant to the foetus and the fathers genes. It is suggested that the longer a couple are together, say about a year, before the first pregnancy occurs the better the chances against immunological intolerance. It has also been suggested that vitamin D and selenium deficiency may be factors leading to pre-eclampsia. Supplementing may be helpful but there is no research supporting this.

The Mayo Clinic has developed this test which is still in the research phase, which may predict developing complications early in pregnancy. They look for a certain type of kidney cell in the urine, a possible marker indicating the condition well before it shows symptoms. This can be up to 12 weeks in advance, a significant period of time to give treatment for HBP before both mother and baby are harmed.