Why Salt And High Blood Pressure Are Connected

Doctors warn their patients that salt and high blood pressure go hand in hand and then you also are told that not enough can cause other health problems. So searching out the true facts on sodium can seem a daunting task.

Cut Down On Your Sodium!

Talk about being confused! This is enough to make anyone throw up their hands in despair if all they want to do is get to the truth about how much salt they should be consuming. Is there anywhere we can find good advice about our sodium needs? If the “so called” experts are giving conflicting reports then how will the laymen fair? Where else can we go? 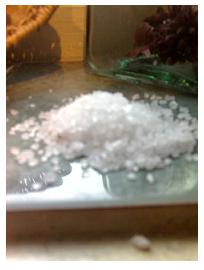 First of all, may I be so bold as to say, ”blanket advice is worthless”, because we all differ in dietary habits, hereditary factors, and health problems. Shouldn’t it be of primary importance to discuss with our doctors how much they actually know about us. Not only should they know about our medical history but also our lifestyle  and dietary habits. We need to be considered as people before diagnosis can be more tailored.

If your general practitioner has limited knowledge on nutrition, perhaps they can refer you before making any dietary recommendations. Discussing the latest facts on sodium, Professor Lichtenstein at Tufts University who is an expert on nutrition and a member of the American Heart Association nutrition committee states, “There is a tremendous amount of data showing that there is a wide range of individual variation in the response to salt,” she says. “The problem is we don’t know who the hyper-responders are.”

Even in the light of this important information, we are still being alarmed by world wide reports on uniform guidelines similar to the one published in the IC Wales.co.uk (The National Website of Wales), the gist of it was that on March 19th 2007 a new campaign was launched by the Food Standard Agency, urging the population to eat less salt. It brought to the attention of the reader that although progress was being made with the general public, studies showed not enough was being done by the food industry to cut down the use of salt in processed food, instead, they were continuing to add potentially dangerous levels of salt to popular foods that people ate on a daily basis.

The wording used in this campaign could frighten the living daylights out of anyone who did not understand enough about nutrition and hypertension, and had heard the latest facts on sodium.

The bulletin went on to scream, ”Salt is a killer. It is linked to high blood pressure, stroke and heart attacks……..”

..and they also stipulated many other diseases to get their message across.

Instilling fear into people, in my opinion, will only result in anxiety about the daily function of eating.

The questions raised and problems presented are numerous, especially when the facts on sodium are not clearly defined, but the answer is quite easy, as R.L. Alsaker M.D. said in his book, Maintaining Health – What shall we eat? How are we to know the truth among so many conflicting ideas? We can know the truth because it leads to health. Error leads to suffering, degeneration and premature death. As the homely saying goes, “The proof of the pudding is in the eating.”

What then, are the facts on sodium? Why do our bodies need it? What role does it play?

Sodium helps regulate the fluids that enter in and out of cells, contributes to the transmission of nerve impulses, is involved in the relaxing of heart and other muscles and, believe it or not, in regulating blood pressure.

If you are healthy, with healthy kidneys, getting rid of excess salt should not present a problem, but if you have high blood pressure for any other reason, or suffer from another illness, having excess salt will only aggravate the problem further like causing the body to retain water.

Consider the research findings of Professor Francesco Cappuccio and others on salt reduction. Engaging more than 170,000 people in 13 different trials to reduce their salt intake, they discovered that by just reducing it by 1 teaspoon a day (2400 mg), they cut their risk of stroke by almost 25%, and their risk of heart disease by 17%.  That figure is the total RDA of sodium for an adult. (The Optimum Nutrition Bible)

Now we are beginning to see the real picture and who in particular need to cut down on salt. Is it normal to have more than a teaspoon of salt a day? How much is in the processed foods if you are partial to eating them?

What other interesting facts can we glean from Dr. Alsaker`s observations:

”I know both from personal experience and from the experience of others that seasoning is not necessary. Instead of giving the foods better flavor, they taste inferior.

A little salt will harm no one, but the constant use of much seasoning leads to irritation of the digestive organs and to overeating. Salt taken in excess also helps to bring on premature aging.” (One of the well known facts on sodium chloride.)

”Sodium, in its elementary state, which is not found in nature, is a white, silvery metal. It is found in great abundance in the succulent vegetables, and is present in practically all foods. As sodium chloride, or common table salt, it is taken in great quantities by most people. Those who have no salt get along well without it, which shows that it does no perceptible harm, but when sprinkled on everything that is eaten, from watermelons to meat, it is without doubt harmful.”

With more facts on sodium, in this same chapter, he also mentions cravings saying that processed and refined foods, which he labels “denatured foods”, don`t satisfy our desire for organic salts because they are lacking in them, instead the salt found in the spices and seasonings develop a craving for more food. I guess that the sodium chloride in the seasoning would trigger off sodium cravings, that manifests as a craving for more food, causing overeating. What a vicious circle!

He continues…..” By soaking foods, they are deprived of much of their soda:……Salts are not usually classified as foods, but they are essential to life. Supply the body with all the proteins, sugar, starch and fat that it requires, but withhold the salts, and it is but a question of a few weeks before life ceases. This is why it is so important to improve our methods of cooking. A potato that is peeled, soaked in cold water and boiled, may lose as much as one-half of its salts, according to one of the bulletins sent out by the U.S. Department of Agriculture. Please remember that most of the salts must be worked into organic form for us by vegetation, and that we are able to take but few elements that have not been thus elaborated.”

Changing The Way We Eat

The sodium chloride on the table is not the correct form to actually do us any good, and in large quantities it actually harms us. If you need to use table salt, use the unrefined type from the sea. Cutting down on salt gradually will bring best results by reducing the craving for salt. Foods you used to eat will then taste too salty and you won`t feel the need to add extra on your plate once it`s served up.

The facts on salt and high blood pressure should help you begin to understand the important role sodium plays in the body, as well as keeping a check on it.  One way of helping yourself is to greatly reduce processed and fast foods and learn a new way of cooking to preserve any amount of organic sodium and other minerals that are still contained in fresh vegetables and other food. 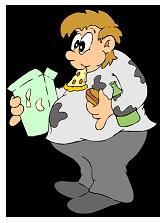 It brings a sigh of relief to know that we can get back to enjoying what God has provided without associating it with fear of getting sick. 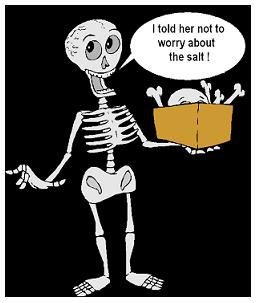 To conclude this article about salt and high blood pressure, a last word from Dr. Alsaker`s book:

“All foods have been condemned as unfit for human consumption by people who should know. However, those who look at these matters with open eyes and open minds will come to the conclusion that man is a very adaptable animal; that if necessary he can get along without almost all foods, being

able to subsist on a very small variety; that he can live for a long period on animal food entirely; that he can live all his life without tasting flesh; that he can live on a mixed diet; that he can adopt a great many plans of eating and live in health and comfort on nearly all of them, provided he does not deprive himself of the natural salts and gets some protein; and finally and most important, that moderation is the chief factor in keeping well, for the best foods produce disease in time if taken in excess.”